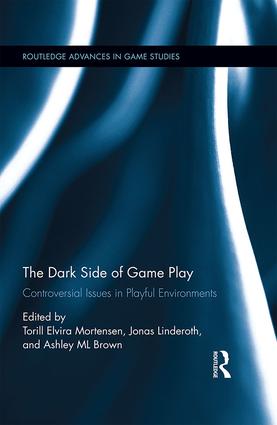 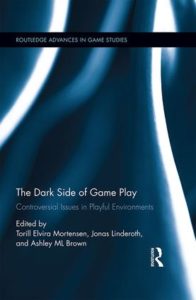 Have a look at Toril Mortensen’s recent blog post on the release of the book The Dark Side of Gameplay: Controversial Issues in Playful Environments she edited with Jonas Linderoth and Ashley ML Brown. I contributed a chapter titled: “Of Heroes and Henchmen: The Conventions of Killing Generic Expendables in Digital Games” which I really enjoyed writing.

The website of the first interdisciplinary European summer school in game and play research which I am co-organizing is online, as is the full programme. Check it out here!

My department is currently looking for a Postdoc candidate in the field of persuasive gaming: Please check it out – you can apply till August 19!

Utrecht University (UU), Eindhoven University of Technology (TU/e) and Erasmus University Rotterdam (EUR) are looking for highly motivated Postdoc and PhD candidates who consider it a challenge to conduct their research in the context of a collaborative research project funded by the Netherlands Organisation for Scientific Research (NWO) on Persuasive Gaming. From Theory-based Design to Validation and Back. The project is a collaboration between UU, TU/e, EUR and a number of Dutch game developers.

The research in this collaborative project is concerned with the characteristics, design principles, and effectiveness of persuasive gaming. We study gaming practices that combine the dissemination of information with attempts to engage players in particular behaviors and attitudes. The project has three subprojects: two PhD projects and one Postdoc project. The PhD projects focus on design principles (TU/e) and validation (EUR), the Postdoc project focuses on the persuasive dimensions of serious games (UU).

Together with a group of other European universities active in the field of games and play studies, we got a EU grant to set up an ERASMUS Intensive Program in the form of a Summer School in 2014:

The first interdisciplinary European summer school in game and play research will take place 16-31 August 2014 at Utrecht University in The Netherlands. It is is aimed at talented PhD and MA/MSc students who are interested in the study of games and play. It offers students an innovative interdisciplinary platform for learning about games and play that doesn’t exist anywhere else in Europe or beyond.

From the journal’s press release: “ToDiGRA is a refereed, open access, quarterly, international, multidisciplinary journal dedicated to research on, and practice in, all aspects of games. ToDiGRA is published electronically and in print via its partner ETC Press”.

The fullhere. Here’s the table of contents:
first ToDiGRA issue can be found

My book Battlefields of Negotiation: Control, Agency, and Ownership in World of Warcraft is now also available through Open Access Publishing in European Networks (OAPEN).

Grab a copy of the book here (as pdf)! 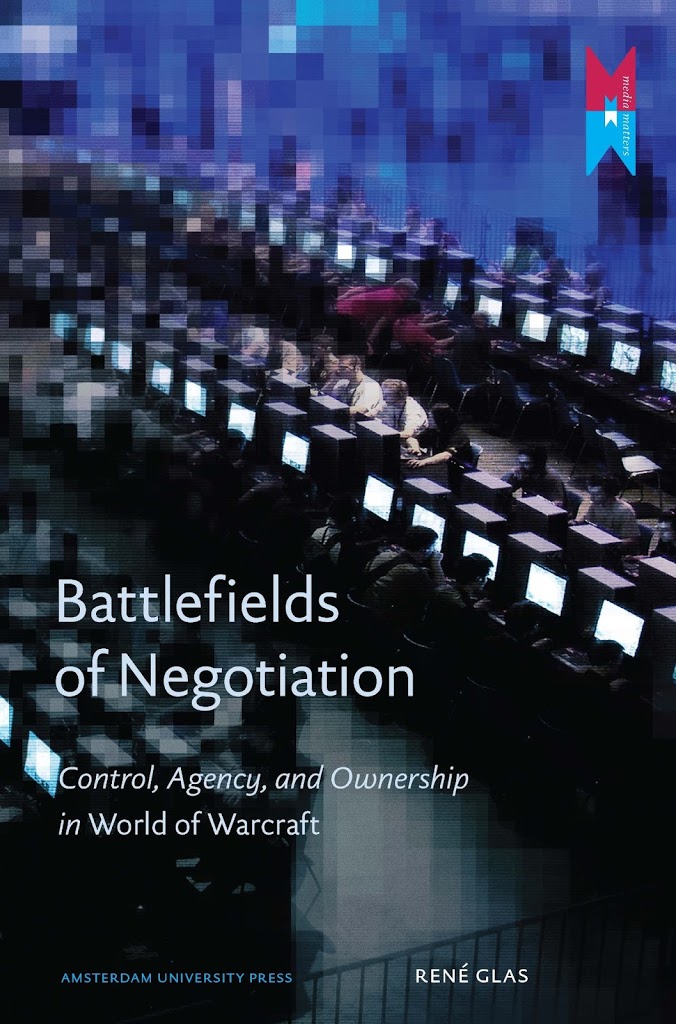 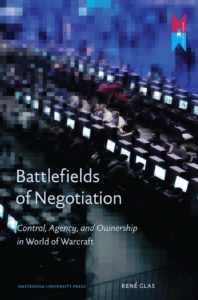 After some delays, I am proud to announce that my book Battlefields of Negotiation: Control, Agency, and Ownership in World of Warcraft is out now.

The massively multiplayer online role-playing game World of Warcraft has become one of the most popular computer games of the past decade, introducing millions around the world to community-based play. Within the boundaries set by its design, the game encourages players to appropriate and shape the game to their own wishes, resulting in highly diverse forms of play and participation. This illuminating study frames World of Warcraft as a complex socio-cultural phenomenon defined by and evolving as a result of the negotiations between groups of players as well as the game’s owners, throwing new light on complex consumer-producer relationships in the increasingly participatory but still tightly controlled media of online games.


“In this volume, a multi-year study of a globally bestselling MMOG, Glas offers us detailed descriptions and theoretically informed analysis of the relationships between players and developers of World of Warcraft.Many game studies scholars have argued for the importance of understanding the contexts of gameplay such as platforms and paratexts, but Glas goes further, showing us how players’ exploitation of those parameters affords as well as limits their desires for control and agency in WoW. He also argues that their actions ultimately shape how they understand the game, its fiction and their relationships with other players.This book is required reading for anyone interested in online games, virtual worlds and deviant play.”
Mia Consalvo, Canada Research Chair in Game Studies & Design, Concordia University

The book can be ordered (in some cases pre-ordered) at the following stores:

The site is up for a conference I’m organizing with my colleagues at Utrecht University. It’s called The Citizen Scientist on the Move: Digital Play, Politics and Epistemology and has both a 2-day academic conference as well as a workshop day hosted by Waag Society in Amsterdam. It promises to be an interesting event!

With the advent of digital and mobile technologies scientific knowledge production has changed profoundly. As interactive, affordable, networked and ubiquitous technologies they invite people to engage with, alter and probe scientific ‘facts’. Play is essential to think about this new kind of engagement with science. It offers citizens powerful ways to become involved with and knowledgeable about scientific practices and offers subversive and exciting possibilities to actively contribute to and transform them. During this conference we therefore want to look at current citizen science developments through the lens of play. We will explore how the playful potential of digital media and cultures strengthen citizen’s scientific engagement and knowledge about their environment; and how the relationship between professional and laymen knowledge production is shifting through the ludic use of digital technologies.

For full conference details, registration and other infor, visit the conference site!

I did a real fun interview recently with Henk Westbroek for his program on regional television channel RTV Utrecht. It deals with the history and future of digital games, and was filmed in a pool cafe equipped with one of the few remaining arcades in Utrecht – well, in the Netherlands probably. The program also deals with game addiction and games and the elderly. It is all in Dutch, but here’s the LINK. 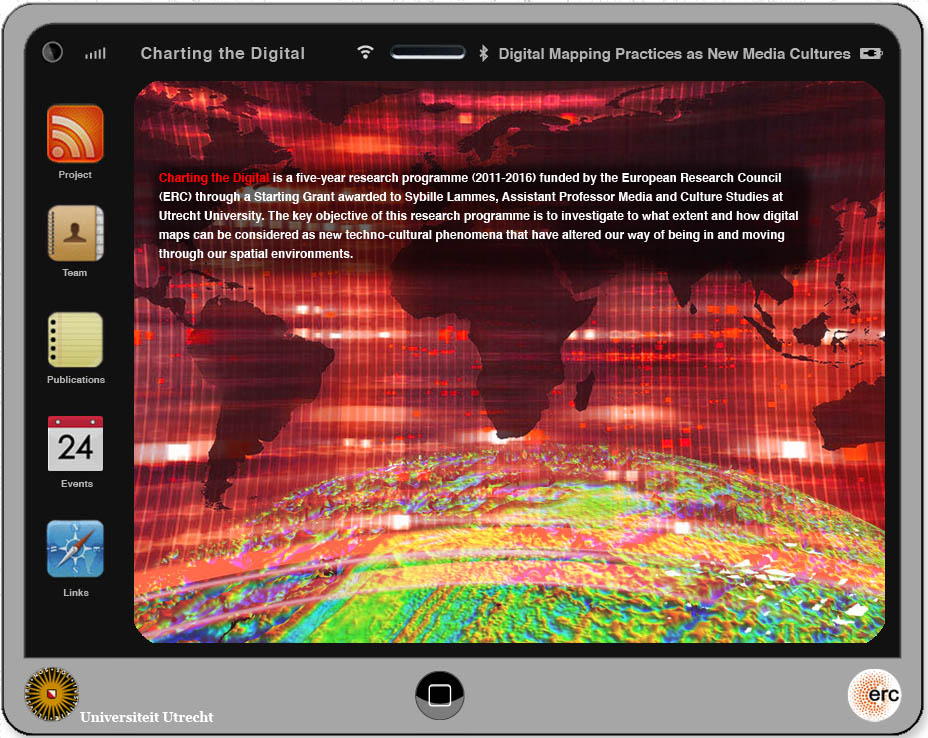 For those interested: my colleague Sybille Lammes is looking for two candidates for PhD positions within her Charting the Digital research project. Below is an excerpt from the vacancy text, go HERE for the rest of it. The deadline for applications is March 31, 2012! 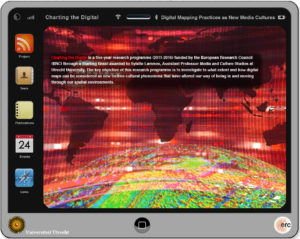 The key objective of this research programme is to investigate to what extent and how digital maps can be considered as new techno-cultural phenomena that have altered our way of being in and moving through our spatial environments. Digital maps allow a greater degree of interaction between users and mapping interfaces than analogue maps do. Instead of just reading maps, users have far more influence on how maps look. Whether a navigation device that adjusts its route-display according to where the driver chooses to go, or a map in a computer-game that is partly created by players, maps have become more interactive and are now co-produced by their users.

This project works from the notion that digital mapping always takes place via interfaces. As the term already indicates, interfaces facilitate interaction between map and user. However, this study will not view interfaces as empty vessels that let this interaction ‘come to pass’ but as material signs that are inscribed with socio-spatial ‘programs of action’ (Latour 1999,1993).

This is the (rather inactive) website of René Glas, assistant professor in new media and digital culture at the Department of Media and Culture Studies, Faculty of Humanities, Utrecht University.